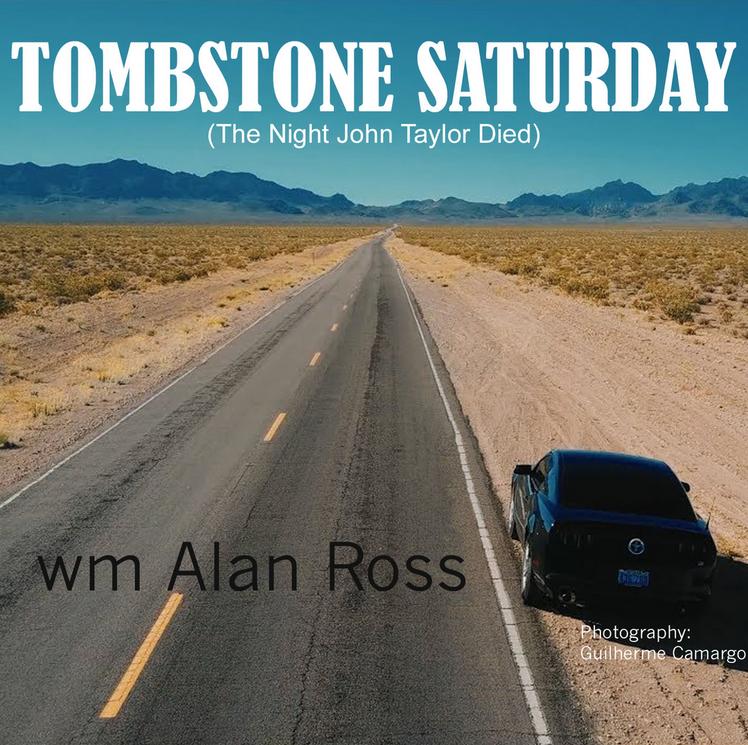 A nouveauté-noire of an ominous night on a bleak stretch of desert highway.

On a late winter afternoon 35 years ago, my dear friend and best man at my second wedding, John Taylor, and I eased out of our weekend afternoon comfort zone at my apartment and headed out late to pick up my daughter, who was visiting at a school friend’s house. That’s where “Tombstone Saturday” begins. Every word of the song from there on out (but one) is shockingly true and provided a vivid memory of horror, humor, and many lessons that remain with me to this day.

“Tombstone Saturday (The Night John Taylor Died)” is the longest song of songwriter wm Alan Ross’s recorded works, spanning 9:28, eclipsing his previous longest (“Little by Little” – 9:08 in 2019) by 20 seconds. The novelty song also beats in length Gordon Lightfoot’s classic from 1976, “The Wreck of the Edmund Fitzgerald,” by nearly three minutes (9:28 to 6:30) and also tops “The Wreck” in total number of verses, 19 to 14.

Tombstone Saturday, movin’ kind of slow
Supposed to have picked up my daughter over an hour ago
Clicked off the TV, said, “Man, J.T., we gotta blow!”

Flyin’ down State Highway 80, flying so high
Must be that J we were passing helped to mellow the ride
Hard to believe it’d be the night John Taylor died

Soon enough I started in on some blitherin’ babbling jag
In that innocuous way that drives people positively mad
But then J.T. was a quiet man not given to excess verbiage

Suddenly, from his shotgun seat there came this unearthly noise
It started way down in his feet, it was not uttered in joy
A beastly growl that grew louder and louder, as I yelled “Amen, brother. Amen!”

Narrative: You know, not all things can be sung in song and that’s why God invented the spoken word. That beastly growl of J.T.’s bears further elucidation. I wanted you to know just how it sounded, and it went something like this: rrrrrrrrrrrh!  rrrrrrrrrrhh!!  RRRRRRRRRRRRHH!!!

I’m telling you that car roof damn near came unhinged
From the intensity of that roar emanating deep within him!
Things were gettin’ weird on the night John Taylor died

Then like a blast from a gun, John Taylor expelled from his mouth
A veritable cannon shot of puke, I swear, I’m not making this up
It was an eerie omen on the night John Taylor died

I said, “Man, you must feel like a million, now that you got that damn thing out!
You got rid of all those toxins and your hair did not fall out!”
A note of optimism on the night John Taylor died.

Now, I did not count the clock, but I know that several minutes passed
Before I glanced over in silence, and what I saw made me gasp
We were now well into the night John Taylor died

In the dimming twilight I saw my friend’s face had turned blue
His head was bobbing like an apple in a freshwater pool
His glazed eyes stared lifelessly, oh, man...oh shit!  What do I do!?

I confess to a case of panic as we neared the Bisbee line
Pot was all over the car and now my best friend had died!
In shock I pulled over. Oh, Lord, what if those blue lights appear in the rearview mirror!
(Narrative: I can see it now. “Evenin’, Officer. Uhh, what pot? Errh, what dead body?”)

But something made me reach across and slowly stroke his head
Then with a closed fist I pummeled his back in hopes of raising the dead
Breathe man, breathe John! Dear God, why tonight? Why now?!

Well, from that petting and pounding the life force finally stirred
Within my dear friend, I swear he just refused to be interred!
His chest slowly expanded with a blessed breath of fresh air

But it was still five more minutes before John Taylor could say a word
Then he surveyed the dashboard damage resplendent with his regurgitation
When informed of what went down, J.T. simply said, “Oh, my.”

So some glove compartment napkins were quickly put to use
But they just could not make a dent in that diabolical puke juice!
So we swung by J.T.’s place to rid the car of all that wreaked

Well, I was three hours late when I arrived to get my daughter
Her friend’s father was not amused, I was in some serious hot water
Had to dig down deep for some magical words to speak

I blurted, “You will not believe what a night this has been.
I’ve been straight down to Hell’s abyss and thrust right back here again!”
Massaging the truth slightly, I said, “Tonight John Taylor died!”

While the record shows that chilly night John Taylor survived, indeed
It was the very last time I gave my friend killer weed
I don’t want to be an accomplice to a friend’s demise

So, if there’s one thing from this story I have painfully learned
It’s that you never know when life’s gonna throw you a curve
Like that fateful night when John Taylor almost died.