Led rainbow
In the early summer of 1969, the band scored a sub-headliner spot on a Palisades Amusement Park outdoor bill along with chart-toppers The Peppermint Rainbow (produced by the same man, Paul Leka, who orchestrated Ross Legacy’s recordings). Though a big ad for the show ran in the New York Daily News the week preceding the June 21 concert, the entire show was suddenly and mysteriously canceled. 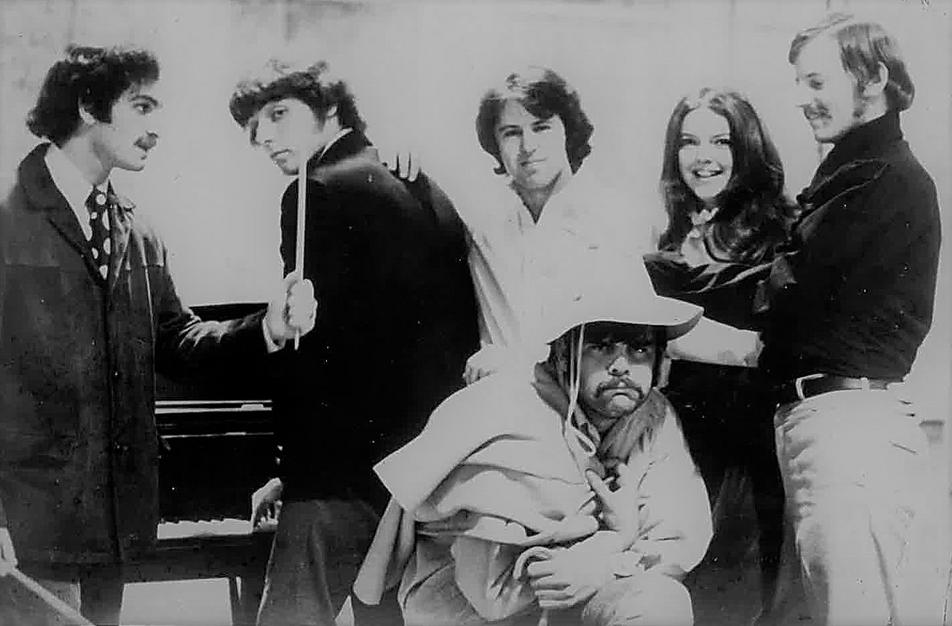 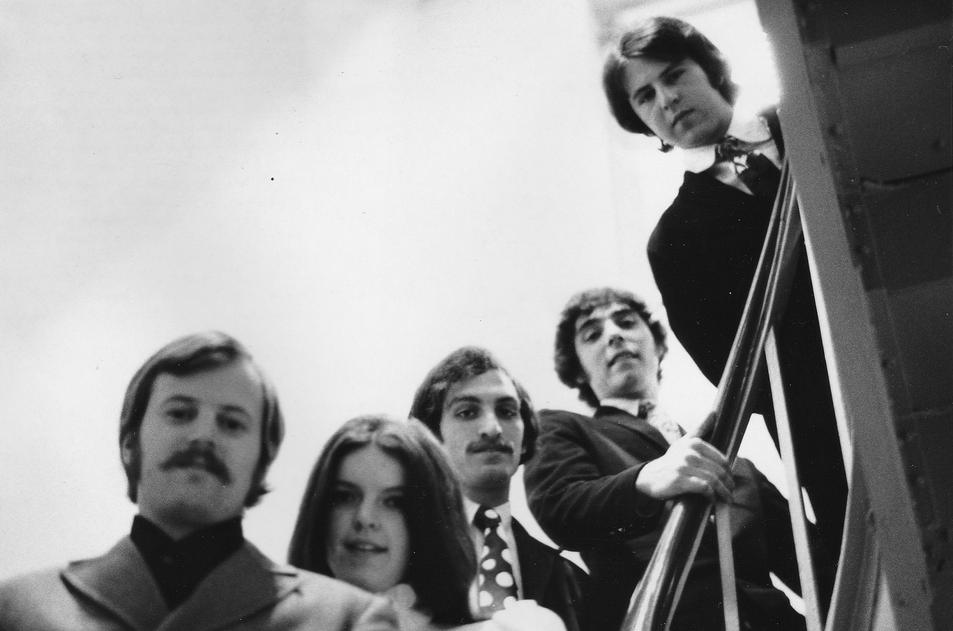 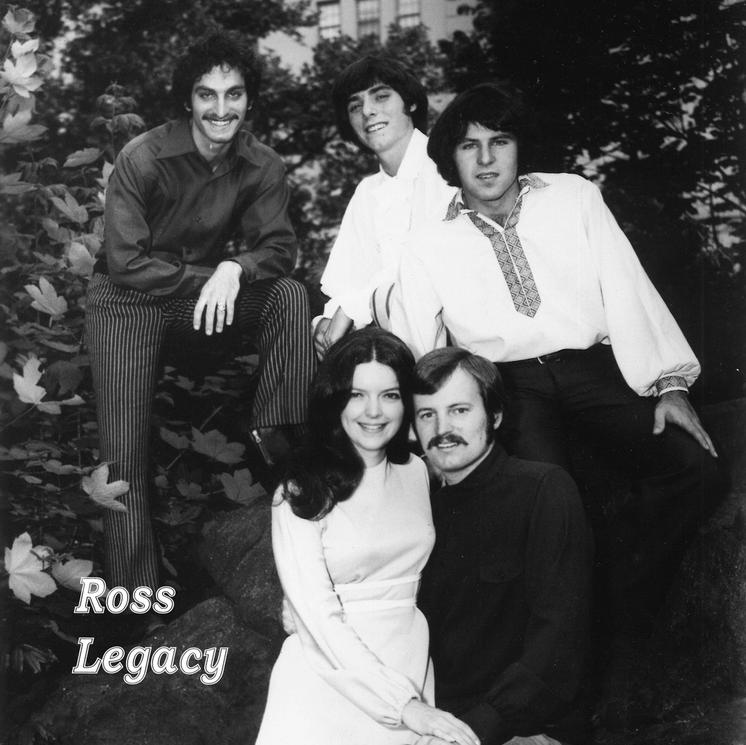 Frankie Fuchs’ Grammy nominations
Former Ross Legacy lead guitarist, the late Frankie Fuchs, went on to an eventful career as an artist/songwriter/producer, including garnering two Grammy nominations for producing two musical albums for children utilizing the songs of Woody Guthrie, in 1992 and ’97. 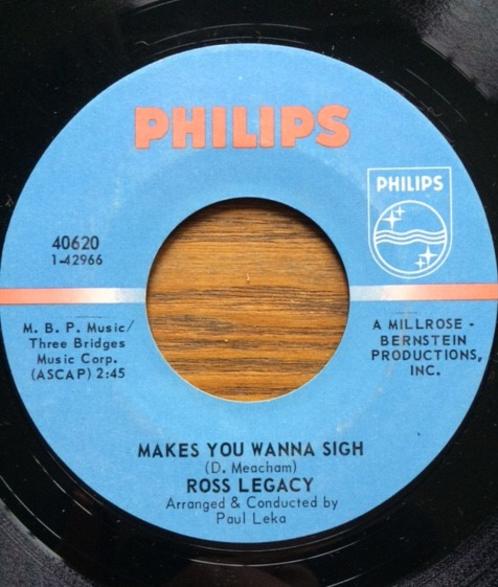 Special roadie
Ross Legacy’s one and only public performance came in the fall of 1968, when the band played a two-night gig at an upstate club named Rhoda Arms, two miles north of Newburgh, N.Y., on Rt. 9W. A dear friend of Alan’s, who was also a young budding musician, graciously offered to be the band’s official roadie for the event, personally gathering then hiking the band’s gear the 90 miles from New York City up the Hudson River Valley to the club. The gig was early on in the five-man group’s incarnation. While Pam and Alan had been singing professionally for three years, the other three band members—Frankie, “Eggy,” and Steve—had only recently been added. As a result, the quintet faced a major hurdle: They knew just three songs together! Suffice it to say, the club manager was not amused to hear “Makes You Wanna Sigh,” “Election Mill Junction Road Blues,” and a rock version of George Gershwin’s “Summertime” repeated eight times each over the course of the four hours both nights. There were plenty of laughs, but the lingering memory of those nights is the stirring friendship and gut-busting grunt work seamlessly provided by that good friend/one-night roadie so that Pam and Alan could concentrate on just singing and playing in their band’s debut. That’s some friend. You may have heard of him. Fella name of Robbie Dupree, best remembered for his ’80s classic pop mega-hit “Steal Away.”

Studio stowaway
A favorite anecdote of the group was the night in late ’68 they were rehearsing in a third-floor studio of Mercury Records in New York City when, after roughly an hour, Jimi Hendrix shockingly emerged from the studio’s darkened control room. “Hey, y’all,” said the rock legend, with a big smile. “Sounds good what you got goin’ on here!” Hendrix had snuck away to nap in between sessions down the hall, where he was producing fellow Philips artists the Hamilton Face Band. For a full take on the odd but exhilarating incident, visit Alan’s blog.

Leka rock
Ross Legacy’s one and only release on Philips, “Makes You Wanna Sigh” backed by “Once There Was a Child,” along with the originally scheduled second release, “Red Corduroy” and “A. Philip Rosenblatt,” include string and horn arrangements by Paul Leka, a well-known producer, writer, arranger who wrote and produced the No. 1 hit “Green Tambourine” in 1967, as well as cowriting and producing another No. 1 hit in 1969, “Na Na Hey Hey Kiss Him Goodbye,” which enjoys a second life as a long-running anthem chant at sports stadiums around the world.

Taking the L
Ross Legacy producers Vic Millrose and Alan Bernstein, who cowrote "A. Philip Rosenblatt," intentionally spelled the title name with only one letter "l" in Philip, hoping to draw promotional attention from Philips label execs for the song.

The 1968-69 New York City folk-rock group released “Makes You Wanna Sigh” backed by “Once There Was A Child” on Philips Records (40620) in June 1969. The band featured former Children of Rain vocalists Pam and Alan Ross, along with guitarist Frankie Fuchs, bassist Mike Ekster, and drummer Steve Turok. In early 1968, through assistance from legendary radio personality Jim Ameche, Pam and Alan, newly married, met producers Vic Millrose and Alan Bernstein, New York songwriters who had written hits for such diverse artists as Frank Sinatra (“Yellow Days”) and Gary Puckett & the Union Gap (“This Girl Is A Woman Now.”)

“Our Dot record had failed to chart and we were looking forward to trying something different with the production team of Millrose-Bernstein,” says Alan. “They soon informed us that Philips Records was interested in signing us—not as a duet but as a group, now that folk-rock bands were securely in the pop mainstream. But straight off our new producers hit us with a whammy: ‘The name Children of Rain has got to go.’ We wondered why. ‘Too negative,’ they said. They then set to promptly writing a song called ‘Children of the Sun.’ ‘That’s it,’ they said, ‘the Children of the Sun.’ ‘No, that will definitely not be it,’ we said. The new name would be our choice. ‘Okay,’ they said, ‘but we will own it.’”

It was not uncommon for record producers to own the name of a band or group. Bob Crewe, who produced The Four Seasons that included Frankie Valli, reportedly owned the rights to the group’s name. It afforded Crewe the luxury of replacing any member at any time, should there be a rift between producer and artist. “We huddled, thinking, ‘how can we foil this?’” remembers Alan.

“We agreed that if we had our own name in the new group name, it wouldn’t matter if they owned it,” says Pam, “because they could never own our personal last name.” The word Ross is also sometimes used as a first name, and, the pair thought, with a noun placed behind it, it might even sound like the cool name of a solo artist. “We always hoped for our music to endure, if it were possible,” says Alan. The name Legacy soon surfaced, and a truly great name, a name the duo loved dearly—Children of Rain—was mothballed for Pam’s and Alan’s next incarnation: on Philips Records, as Ross Legacy.

The group, though, was short-lived, disbanding in August of ’69, when Pam and Alan relocated to Nashville to begin a country music career. Former Children of Rain member Denis Meacham wrote the group’s A-side single “Makes You Wanna Sigh,” playing slide guitar on the cut, as well as second guitar on “Red Corduroy”—scheduled to be the group’s second release on Philips but jettisoned when Pam and Alan moved to Nashville. Brilliant but unsung harmonicist Jack Goodfellow lends his skills on “Makes You Wanna Sigh” and “Red Corduroy.”

In celebration of the group's 50th anniversary of its sole release on Philips, the six-song album "Ross Legacy," including both sides of the Philips single plus four previously unreleased studio cuts, is now available at all internet record stores and digital streaming outlets. 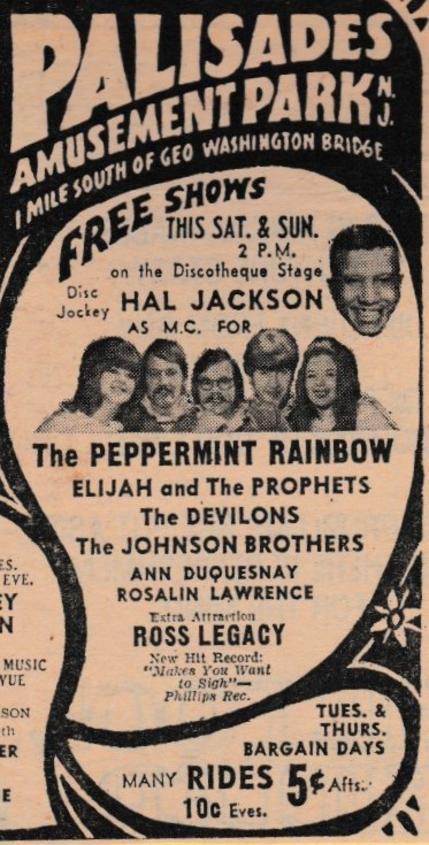